Endless fun events and activities ! Amusement parks, concerts, theaters, shows, nightclubs, museums, restaurants, art galleries, shopping, tours and so many more, plus our in house activities like karaoke , comedy night or club night out will keep you very entertained. Plus we have ping pong, billiards, foosball, basketball, a weight area and evening socials.

Exciting 5 hour tour of the Entertainment Capital of the World! Sample the rich history, diverse culture, sun-drenched beaches and pulsating movie tempos of Los Angeles. You will see: The "Hollywood Sign" up close, the "Walk of Fame", Melrose Avenue, Sunset Strip, many movie shooting locations, Rodeo Drive, Beverly Hills, the former "Baywatch Beach", Venice Beach, Downtown, Gang Lands, over 30 "Star Homes", and much much more! Learn interesting secrets and facts of Hollywood, with a "movie star on every corner," and surprises galore awaiting you, the vast LA experience known as the City of Angels!

Universal Studios Hollywood's world-renowned Studio Tour has been reinvented for the 21st Century. The new tour will take you on a one-of-a-kind journey through the world's largest working studio where you'll see the past, present and future of Hollywood come alive. Exciting movie making demonstrations, breathtaking special effects, plus a world class amusement park with amazing attractions, shows and the huge Citywalk featuring the Hard Rock Café and lots of other shops and restaurants, plus the iMax theaters!

"The Happiest Place on Earth" is an enchanted kingdom of fantasy and imagination filled with classic family-friendly attractions and magical entertainment, dining and shopping. Blast off to outer space, venture up jungle rivers, encounter ghosts, pirates and flying elephants, and find yourself laughing, flying, spinning and splashing through attractions and rides whose memories will never fade. Enjoy timeless tales and bold adventures in over 60 magical attractions, rides and funtastic entertainment. Walt Disney said "I don't want the public to see the world they live in while they're in Disneyland. I want them to feel they're in another world." Come live the dream!

Attention Thrill-Seekers Worldwide! SIX FLAGS MAGIC MOUNTAIN...THE XTREME PARK has the largest collection of XTREME roller coasters on the Planet! And now with the addition of Scream! We'll shatter our own Guinness Book world record status for most coasters and rides! Enjoy the tallest and fastest stand-up roller coaster in the world -- Riddlers Revenge! and the highest roller coaster -- Superman The Escape! Six Flags Magic Mountain has all the thrills! Visit the new Bugs Bunny World with nine new rides and attractions plus a 6000 square foot Fun Factory. Speed head-over-heels on rides including Batman, Terminator Salvation, X2 and Superman. ROLLERCOASTERS! Its all here at Six Flags Magic Mountain.

Cruise around Hollywood in style ! You will feel like a ROCK STAR and hit Hollywood like a MOVIE STAR in the Party Bus night time cruise. Get the RED CARPET TREATMENT as you are escorted around Hollywood and the Sunset Strip. Meet other backpackers and travelers and have the time of your life. Go to bars, clubs and see some really cool and hip night time spots. 21 and up... Super Cool !

Venice Beach is unlike any place on Earth. Well known for its artists, street performers and funky atmosphere. It’s a virtual carnival running year round with free admission. The best place in LA to people watch, join us for a tour through the many bizarre and interesting scenes that make Venice truly unique. muscle men and women pumping iron, roller skaters with guitars and plenty of souvenir shops and food. You can also ride bicycles or rollerskates along the boardwalk, FUN !

See the Movie Capital up close! Thrill packed 2.5 hour tour of Hollywood and Beverly Hills. See "Celebrity Homes" and Hollywood landmarks including the "Hollywood Sign", the "Capital Records" building, the "Playboy Mansion", the "Walk of Fame", the home of the "Academy Awards" and more. Hop off at the best parts of Hollywood, Beverly Hills and Bel Aire. Cruise around with other cool backpackers and travelers in our air coinditioned vans and let our friendly funny hosts show you around the best of "Tinsel Town" !

The J. Paul Getty Museum houses Greek and Roman antiquities, pre-twentieth century European paintings, drawings and sculptures. Located in the breathtaking hills of West Los Angele, truly a museum you will not want to miss on your visit to LA. Free entrance and access with public transportation, architecturally stimulating!

We are right on Hollywood Boulevard in the heart of Hollywood with a view of the Hollywood sign from our courtyard. You will be walking distance from all the action of Hollywood and centrally located in Los Angeles, the hotel and hostel is close to the subway and bus stops to get around the "City of the Angels". We are a Cool Hollywood Motel that has been remodeled into a "colorful retro designed" LA hotel and hostel, and right down the street is all the action of Hollywood with restuarants, bars, clubs, theaters, shops and more, a very cool city to explore, yes! eat, drink, hang out and meet other cool people from around the world.

From the Banana Bungalow Hollywood Hotel and Hostel you can walk to: 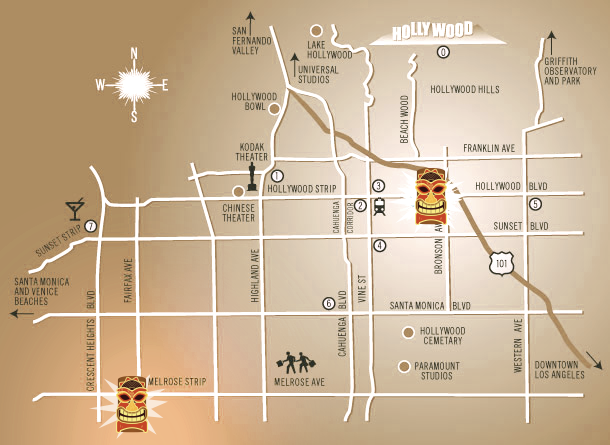 One block away is the Melrose Strip a fantastic place to shop, eat, beautiful people watch and check out all the latest worldwide trends in clothing, music, fashion and food. West Hollywood is the epicenter of coolness, where you can see Hollywood stars shopping, eating or hanging out. We are close to CBS Studios, the Sunset Strip, LACMA, the Grove, the Improv and Groundlings comedy clubs, Beverly Hills, Rodeo Drive, the Farmer’s Market, the Beverly Center and so many chic hangouts.

From the Banana Bungalow West Hollywood Hotel and Hostel you can walk to: 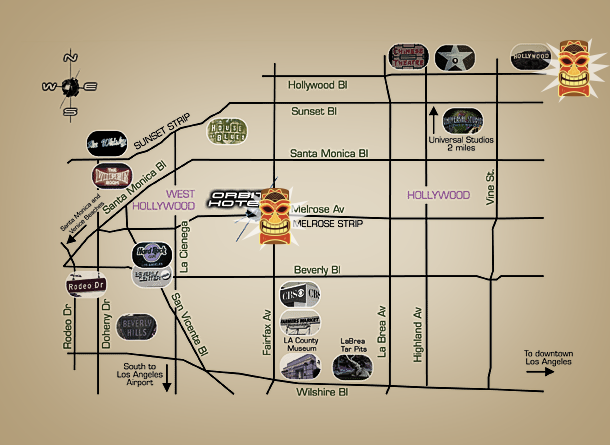